A Look Around Our Museum 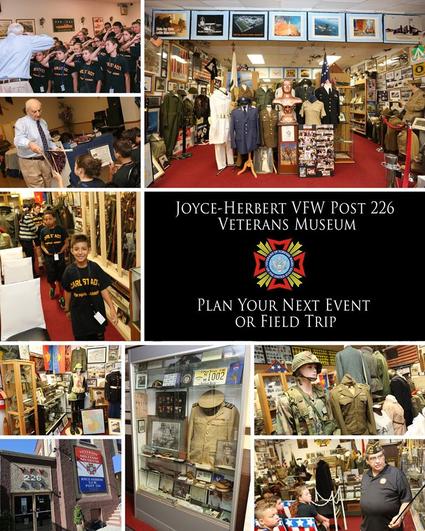 The Joyce-Herbert VFW Post 226 Veterans Museum opened its doors in 2006. It has continued to attract Bayonne students, residents, organizations and visitors from surrounding areas through scheduled visits. It is open Saturday from 12 to 4 p.m. The museum is filled with military artifacts from every war starting from the American Revolutionary War to the two contemporary wars in Iraq and Afghanistan. The museum schedules various programs and speakers upon request. Call to arrange a private tour for your school or organization, (201) 858-1416.

Joyce-Herbert VFW Post 226, the oldest post in Bayonne, was charted on October 8, 1919 by returning World War I veterans.  Martin Joyce, U.S. Navy, was killed on a ship headed toward England during World War I.  William Herbert, US Army, was killed two weeks before World War I ended. He is buried in France.  The Joyce-Herbert VFW post 226 was named after the first and last military serviceman from Bayonne who died in World War I in the line of duty.  In 2005, Glen J. Flora Sr., Commander and Founder and Senior Vice Commander and Curator Joseph Kennedy decided to display the military history of our local town heroes.

We Need Your Support